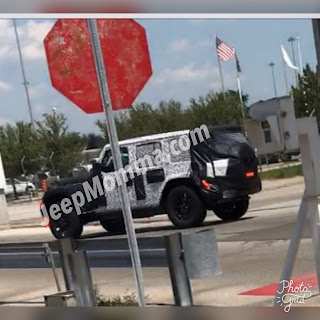 During my tour of the Toledo Jeep Assembly Plant luck was on my side. As we headed over to see the JK's and JKU's in production there sat a Red JL surrounded by 3 engineers with lap tops. The new Jeep JL will be assembled on the same line as the Cherokees, the Liberty and the Dodge Nitro previously were built.

They have not started full production of the JL yet, as it is still in the testing phase. There are a few JL's are being made, but none of them will be sold to the public. Some will go to the Chrysler Tech Center in Michigan, and some will head out for crash tests for safety ratings. That part makes me kind of sad.

NO PICTURES ALLOWED INSIDE THE JEEP ASSEMBLY PLANT!!!

All the windows on the JL assembly line have been covered up with cardboard, so no pictures of the new Jeep will get leaked out. 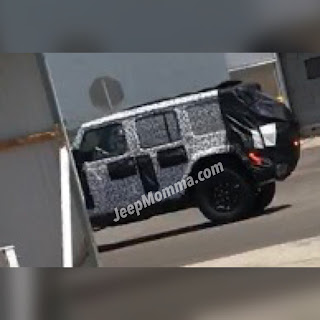 During my Jeep Tour I spotted 2 JL's ~ one Red uncovered Jeep inside the plant. And one elusive Jeep camo'd in the black and white plastic wrap like you might have seen in pictures out on the world wide web. From a distance you would have thought it was just another JKU. As I got closer I could see the differences. 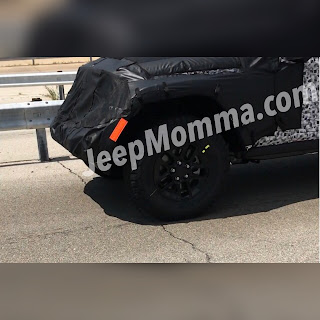 I was able to get up close and personal with this super secret Red JL. The front and rear bumpers are a different design then the JK's. Sleeker, more curves, my guess is for the aerodynamics, not at all like the straight edges and corners of the JK's. The fenders are also different.


I had a chance to peak into the interior. I am told there are several trim models so each one will have it's own look. 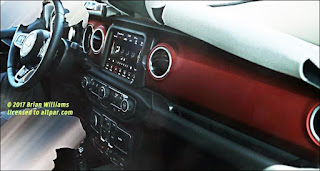 There are pictures online of the interior of one of the JL's. However, the JL I saw didn't have this same interior.


I can say the passengers in the back seats will be happy because in the JL there are built in grab handles.

I wish I could have spent more time looking at this new JL. The whole tour was very overwhelming and surreal. It was amazing to be there on the assembly line floor right next to engineers working on the new Jeep. The whole experience was an overdose of Jeep. So much to take in and see in such a little time period. (I was limited to about an hour and a half - See my blog post August 3, 2017) 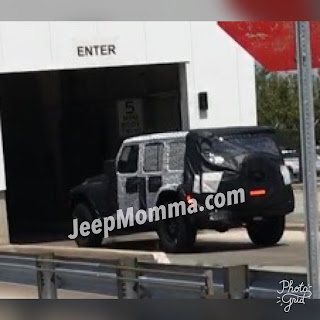 Once outside the plant in the parking lots where they stage the Jeeps for shipping it was again a Jeep overload. So many Wranglers, all different kinds.

We headed over to the inside testing facility where they road test the Jeeps to listen for rattles and squeaks, among other things. As we walked closer I spotted the black and white wrapped Jeep heading into the indoor testing garage.

Even though the new JL has it's own version of OEM front and rear bumpers, fenders and other Jeep parts there will always be Jeepers who will want to make their JL their own. 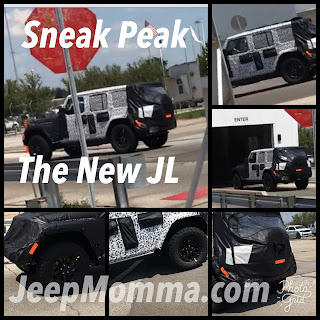 I am pretty excited for the unveiling of this new Jeep, as I know the rest of the world is as well. It was cool to see the new JL up close and personal before the rest of the world. Not many people can wear that badge! I am honored to have earned that badge. The JL is pretty cool, but nothing will ever compete with my 2015 JKU Rubicon.

Below are a couple of articles I found on the internet talking about the new JL.


The New Wrangler JL on the Road