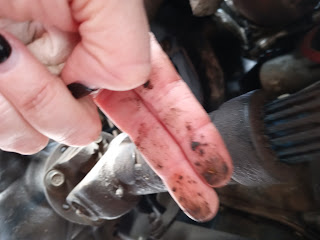 I had my housing assembly replaced. The mechanic that worked on my Jeep
says he sees this type of leak a lot because people over torque the plastic part and it cracks, and cold temperatures make it worse. Plus, it looks like this issue is a design flaw…. 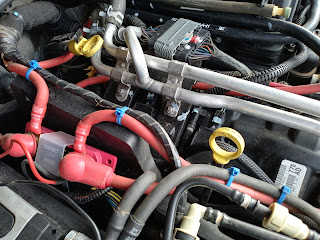 The Chrysler Pentastar V6 oil filter housing and cooler assembly for 3.2L and 3.6L engines can become warped, brittle and crack over time with constant exposure to engine bay heat. I read this serious flaw in the design of the Pentastar oil filter housing and cooler assembly and often results in severe oil and coolant leaks and can have catastrophic consequences.
Over the years there has been speculation that Chrysler cut a fewcorners with the Pentastar V6 and the original equipment parts. The plastic oil filter housing and cooler assembly is one example. The number of complaints for this part is staggering.  There have been so many complaints – with the OE replacements even, that Chrysler has discontinued the manufacturing of the Pentastar oil filter housing and cooler assembly. Even more surprising is that Chrysler has known about this problem for a long time and has never issued a recall.
I called around and three major auto parts stores shared, the factory part is no longer available and claimed it hasn't been available for a year and a half. So I tried to go with the Dorman Aluminum upgrade. That part is not available right now.  If you suspect this problem in your Jeep you better start hunting for the part now. The Dorman aluminum aftermarket part is very, very hard to get. If one does come in it doesn't stay in the store for more than a day.
I found the aftermarket part. $259.99. You need to buy the manifold set too, $51.99 easy to get. It’s still plastic but not the OEM part Standard Autos Part which will also work.
I am hoping my oil leak woes are solved because I still have some work to do on my Jeep fixing unfinished work from the previous garage I was using. Installing aftermarket lower control arm brackets and the one shock mount. Plus, finishing the work on the axle truss.
at April 26, 2022