The fourth generation Wrangler, the JL made it's television debut during Superbowl 52. The only good thing about that Superbowl. Yes, I am still bitter! 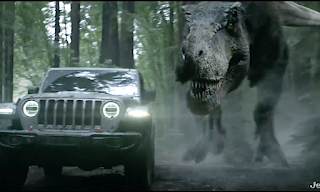 The commercial was called Jurassic Jeep, an reenactment from the T-Rex chase scene from the 1993 Jurassic Park movie. However, Jeff Goldblum one of the stars from the movie is driving a silver with red accents two-door 2018 Wrangler JL Rubicon instead of a 1992 Wrangler (YJ) Sahara Edition.  Of course it's a dream as the commercial ends with Goldblum sitting in the Silver Rubicon in a showroom, where a Jeep saleswoman asks if he would like to take the JL for a test drive, to which Goldblum replies that he already has.

All the JL trim models are available in two door and four door except the Sahara which is a 4 door only. It was designed to be more comfortable on-road. The Wrangler two-door is 2.5 inches longer overall than before, while the Wrangler four-door has grown by 3.5 inches.

The new Wrangler is roughly 200 pounds lighter than the Wrangler JK. Most likely because they added more aluminum  to the JL. Like the front windshield which is easier to fold down, or can be completely removed. Some of the body panels are also made of aluminum some still made of steel. The hard top and doors are made of aluminum which make them easier to remove.


LED front headlamps and rear tail lamps are available, as are daytime running lamps on the front fenders. A blind spot monitor is built directly into the taillight housing. The rear spare tire has been moved down to increase rear visibility.


The interior design was inspired by the Jeep CJ-5 and 1987-1995 Wrangler (YJ) models. It is a more modern interior with a majority of the interior switchgear unique to the JL, except for some parts which are shared with other Chrysler products. 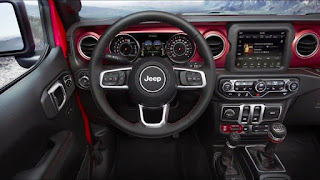 There is a new three-spoke, retro-inspired steering wheel, and a color instrument cluster display screen is available on upper-level trims. There are also three updated infotainment systems.

The interior roll bar was redesigned to accommodate the three new roof systems. The Sunrider soft canvas rook is the standard for all models. This new soft tops is easier to remove. The Velcro and zippers enclosures from the previous models have been removed. Once these easily lifted out windows are removed they can be stored behind the rear seats. Now there is a lever that allows you to lock the roof into place when it's in the Topless / Down position so the soft top won't flap when you are cruising down the road.

Like its predecessor, the Freedom Top hardtop is a three-piece color hard metal roof system. The main difference is the weight which makes it easier to lift and remove the roof. 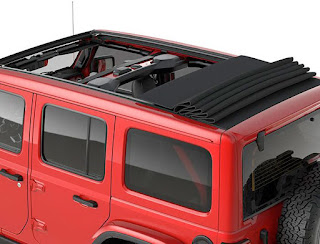 The Sky One-Touch Power Top the first of its kind on any Wrangler. It is a soft canvas panel that is power-retractable. Simple press a switch inside the Jeep and the roof folds back. Similar to the system in the Jeep Liberty.