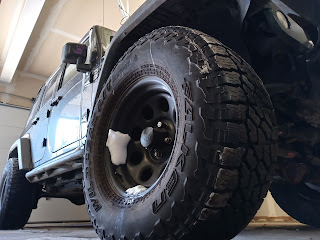 One year during Christmas we were playing a Christmas
present swap game. My son was trying to decide which present to pick. He was struggling with picking between two of the largest gifts. My sister told him “Bigger isn’t always better”. 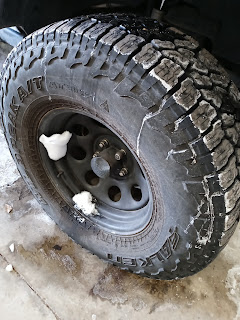 You could say that about Jeep tires too. Most everyone who get’s a Jeep eventually wants to upgrade with a lift and bigger tires. It is all a part of the Jeep Addiction. Depending on what you use your Jeep for, going bigger might not always be a good idea.

The Jeep in stock form is a very capable off road vehicle. If you do decide to upgrade to those 35’s you need to be aware of what could be in store for your future pocketbook.

Garage Clearance - My 3.5” lift and 35” tires fit in my garage. However, if I was driving with my top in the Sunrider position, I couldn’t fit in my garage. There were many, many times I forgot the top was up and would make a huge racket driving into the garage. Not good for that soft top, tearing it up on the garage door. 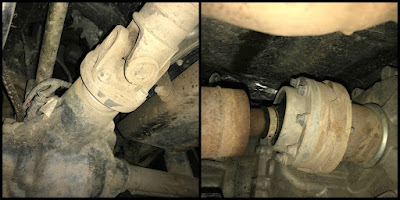 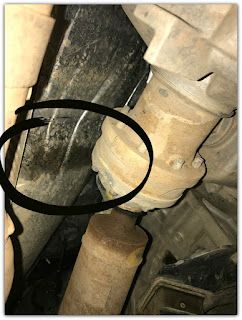 This boot cannot hold up to the stress of the added lift . With all the flexing I did which wasn’t a lot maybe once a month wheeling, it began to crack and split. Then it began spewing grease. You can’t refill the grease on the OEM driveshaft, so it will eventually break. 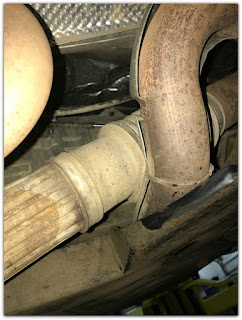 These stock driveshaft's also are larger in diameter. So when you lift your Jeep to fit those bigger tires it can cause the OEM Driveshaft to possibly rest on the exhaust which causes more issues.

Ball Joints are another weak point from the bigger tires. I lifted and added 35” tires to my Jeep in 2016. I would go wheeling to Rauch Creek Off Road Park, The Cove in Virginia and Uwharrie in North Carolina. These were all highway miles to and from the parks once a month during those three years. Plus, I used my Jeep as a daily driver going to and from work and errands in town. In 2019, three years after the lift my ball joints failed. I replaced them with an aftermarket ball joint.

That cost me about $600 for the parts and labor. I should of taken the advice of my mechanic in Maryland. He suggested I just go with the OEM ball joints. The aftermarket ball joints took 500 miles to properly seat. Those 500 miles of driving were the most intense miles of driving in my life.

The bigger the tires the more stress it puts on the suspension and those gears. 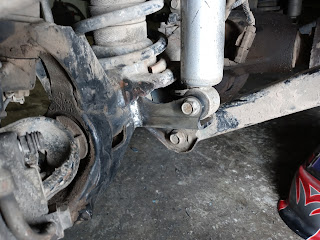 There are several places you will want to upgrade. I was able to add more strength by welding the C-gussets. Beefier shock mounts and control arm mounts are a good idea as well.  I added aftermarket control arms and The Yeti Steering system.

Regular maintenance checks and "at home" checks are necessary to keep and eye on potential problems. You will want to catch these problems before they become catastrophes.

The inner tie rod ends can go bad as well as those control arms, on the Jk’s and JKU’s especially if you wheel. If you take your Jeep off road at some point you will most likely at some point come down hard on them, which can alter the geometry. Like I did.  It’s a good idea to watch the tread wear on your tires. Getting regular alignments is a good way to detect bad geometry. You should also do at home check to make sure everything is holding up.

Inspecting the movement of your tires is important to detect problems.  First make sure you can unload the Jeep’s suspension. That means getting your Jeep up on jacks so your front tires can freely move.  By moving your tires in different directions will give you an idea of which issue it may be. Putting a big pry bar under the bottom of the tire and trying to move it up and down. If there is play this could be bad ball joints.

Taking one hand at the 12 o’clock position and the other at the 6 pm position and moving your tire back and forth, feeling for movement and play. If you have the movement that usually means wheel bearings.

The 3 pm and 9 pm position doing the same thing would most likely be bad inner tie rod ends. Do your due diligence though, research thoroughly. It may not always be a bad tie rod end. Look closely at that tie rod movement. It could also be your steering knuckle. Just like mine. The hole got wallowed out.

I had to replace my steering knuckle. Be careful when choosing your replacement. Those aftermarket knuckles could require a certain size lift and certainly upgraded steering.

Good routine maintenance and visual checks along with the tire check can hopefully find problems before they become catastrophes. Like I said in part one Bigger isn’t always Better. Some may think bigger is better but I can tell you for sure Bigger drains your bank account.