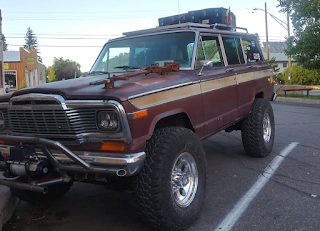 Maggie May was a 1980 Jeep Wagoneer left to live out eternity in a junkyard, until she was rescued back in 2019 to be restored to join me on my Adam's Extreme Adventure across the United States. 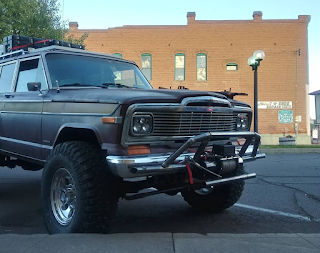 She was promised to be an epic build to take overlanding across America. Unfortunately, she never made that trip and didn't get to see any part of our beautiful country. They say promises are only as strong as the person making them. The person who promised to get Maggie May running in time wasn't able to make her engine sing so she sat alone in a single car garage while I spent 37 days overlanding across America.
Once I returned to Colorado, she was moved by her rescuer to a dirt field. Day by day the chances of her ever seeing the trails was growing dim. My eyes began to see her rescuer left a long string of broken promises from coast to coast and Maggie May was another broken promise.
I always had hope those wheels see those rocky trails but instead she was picked apart like vultures eating a dead animal in the desert only leaving the carcass. Once again left to rot, abandoned in a field to die a lonely death. 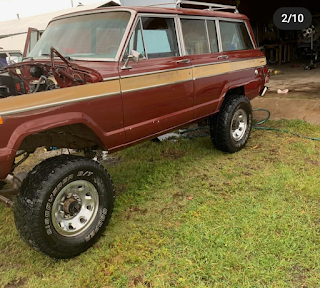 I helped acquire many parts for Maggie May, new state of the
art headlights, top of the line front and rear driveshafts, and fancy new off road tires. Not to mention the financial help getting the engine up and running. I did hear the engine run once but never saw her driving on any road or trail. 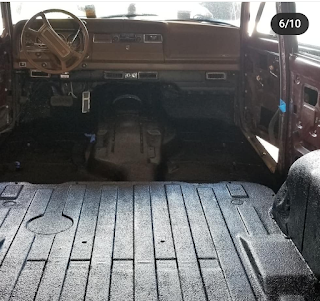 I guess boredom set in for her rescuer and she was slowly picked apart piece by piece until just her body sat on cement blocks among the weeds. 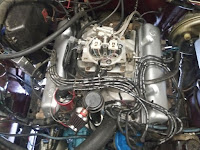 Her engine went to California and still sits quietly in a garage. Will it ever run? We will never know. 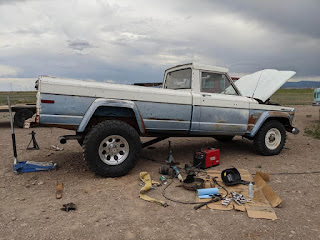 The tires, one ton axles, driveshafts, performance shocks and headlights were installed on a 1971 J4000 Jeep Truck. Now in the hands of a new owner who will hopefully appreciate that Vintage Jeep. 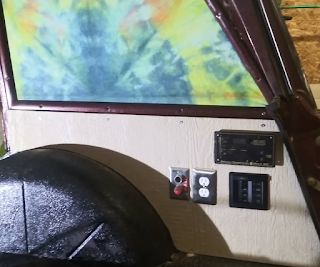 As for the interior build and body of Maggie May,  she sat alone in the corner of a farmers field for over a year. She was used up and tossed aside like a piece of trash, but she still had so much life left in her. I had so much hope for her. I hated knowing she was sitting out in that field waiting for life to fill up the beautiful vintage Jeep.
The last I checked was about nine months ago and she still sat alone in that field. I was curious, so I recently checked with the former land lord. All I know is Maggie May was hauled off to the crusher, when there was some construction happening on the land. We will never truly know the fate of this beauty we can only guess.

This poor iconic American Jeep was discarded like a piece of garbage on the side of the road never to see those dirt roads like she was promised, her dreams crushed. It breaks my heart because there was so much potential for such an amazing journey with this Jeep. I know she was just a bunch of metal but when you become a Jeep owner you come to love them like they are real living breathing entities.

Maggie May May You Rest in Peace!